On April 24, 2018 I had the distinct pleasure of attending my first Weed For Warriors Project (WFWP) chapter meeting located in Sacramento, California. Full disclosure, I am not a veteran but my father is and I have been drawn to WFWP because I believe in the mission of providing cannabis to veterans suffering from the various ailments associated with their service to our country. What I found was that this organization, and the chapter meetings, are so much more than just providing medicine to veterans. These meetings are about taking an opportunity, once a month, to come together and fellowship. As Chapter President Mark Carrillo says, “the medicine is simply the added bonus”. 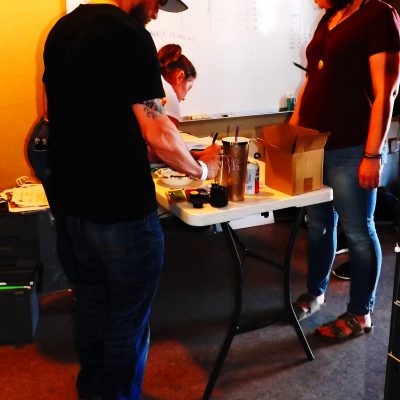 Amanda Braun checking in the warriors

As I walked into the front office, where the meeting was being held, I was greeted by the smiling face of Amanda Braun who was checking in each and every attendee of the meeting. The very simple process included verifying that your DD-214 was on file and that your current medical cannabis recommendation was in hand. This process only fulfills the legalities, Under California’s Prop. 420 (the cannabis co-operative defense), of providing each veteran with the gift bag of cannabis medicine. The process was quick and painless and everyone in line was jovial and happy to be participating. 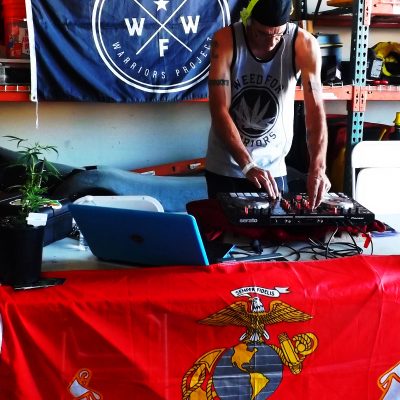 Venturing further into the event location I was greeted with amazing music, courtesy of Highbreed, and the warmth of comradery exploding in the venue. There were tables set up, on either side of the room, with small groups laughing, talking and enjoying the delicious menu provided by Mark Carrillo and the leadership of the WFWP Sacramento Chapter.

I walked to the back of the room and sat down at a nearly empty table to get my camera ready and prepare to take some notes. Within moments I was approached by a woman named Tracy. She had been behind me at check-in, was new to the meeting, and was interested in who I was and what I was doing with a notepad and camera. As we began to talk she told me her story of being a transgender veteran was in the Women’s Army Corp. She described her job as an Administrative Specialist and explained that she served just over three years. She went on to tell me that she has Degenerative Disk Disease and as a result had been required to endure 18 surgeries, 5 of which were full joint replacements, and that since August of 2016 she had replaced 46 pills per day, including morphine and Norco, with cannabis alone. “Cannabis has changed my life” said Tracy.

Sitting at the same table was Levi and his wife Cynthia. Levi’s story was quite heartbreaking as he currently suffers from both PTSD and chronic pain as a result of his time in service. Levi was put into the service, by his mother, at age 15. No Letter of Consent was signed by his mother, as his age was still too technically young for military service and the recruiters were trying to get him pushed through the system. Levi’s physical injuries came as a result of a late return to base, after a weekend of leave, and his superior officers feeling the need to make an example of him to the rest of the unit. As a result of the beating he received, from his superior officers, Levi has a severe upper body injury and several paralyzed fingers on his right hand. Thirteen years ago Levi applied for disability, through the VA, and was awarded only 10%, which is equal to a few hundred dollars of support per month. I asked Levi what he would like to put out to others about his interactions with, and the systems currently in place at, the Veterans Administration. His first response was a crooked smile followed by an explanation that he didn’t want to speak ill of the VA because they do provide a great deal of service for very needy veterans. However, he followed up by saying that “We need better mental health care providers, for veterans, and more assistance in communicating with the VA in disability issues”.

He went on to tell me that he knows many veterans who are currently homeless, unable to work, in need of better evaluations to determine more accurate disability statuses and don’t feel that they have anyone to turn to in these desperate times.

Levi has been fighting, for nearly 13 years, to get his disability status moved up to 100% but has had a very difficult time finding assistance in doing so. He then reiterated that he was not alone in his issues. 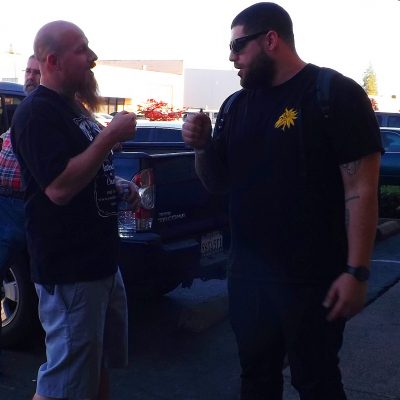 After speaking with Tracy and Levi I decided to move further, towards the front of the room, and speak to some more people. Right about that time the Sacramento Chapter President and Regional Chapter Director, Mark Carrillo, made an announcement and introduced me to everyone. I could not believe the warm acceptance I received as I was a stranger in “their house”. Every face gave me a smile and thanked me for working to spread the word about the Weed For Warriors Project. Although few other people wanted to tell me their story, on the record, they were all willing to chat about their experiences in the chapter meetings. I heard words like “camaraderie” and phrases like “this is a place to connect with other people who understand you”. 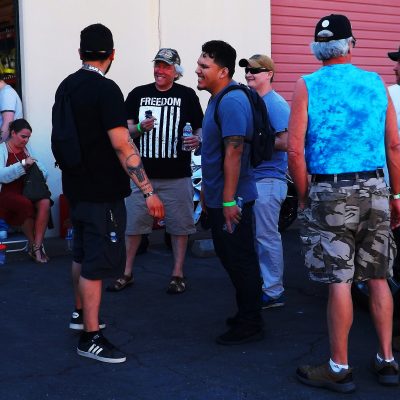 Warriors conversing outside of the meeting

After spending just about an hour chatting with the various tables I took the time to sit down with Mark Carrillo. As we discussed what the chapter meetings do for the men and women, who attend, he said “these people look forward to this time every month”. Additionally, Mark explained that he usually drives up to the venue (donated by a local member of the community) to find up to 8 people waiting for him to get there and get set up. He went on to say that although it is important that every service member gets a much-appreciated gift bag at every meeting “the medicine is really just the added bonus to the fellowship that they get from the meetings”. 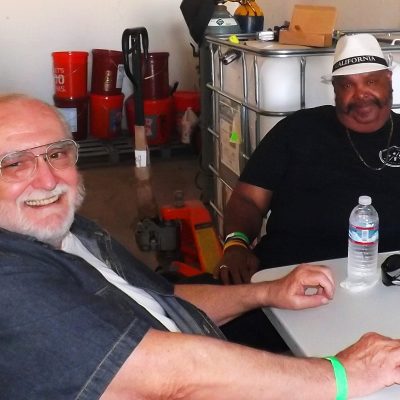 Many of these veterans, who prefer to remain unnamed, will be friends for life

Before the meeting ended I was approached by a gentleman, who preferred to remain anonymous, who wanted to tell me that:

“This place (the meeting) is special because every time you come here you meet somebody new. You never know if they are going to help you or if you will be the one to help them, which in turn still helps you, but you can sit down with that person and they don’t need to tell you their life story for you to each understand where they are coming from. You both have been through a similar experience and it gives you the same perspective on the world and when you are suffering in the way that many of us are suffering you just need someone who understands you. That is why this is so important.”

If you (or a friend or family member) are a service member and are looking for a place where you can feel accepted, like Tracy who told me that she found more acceptance in that room than she found in many of her other experiences in life, or if you are looking for information on how cannabis can help you with your various conditions resulting from your service to this country I would highly recommend that you seek out a local WFWP Chapter and see if it might be a good fit for you. For more information on the best local chapter in your area contact Mark Carrillo at mcarrillo@wfwproject.org.