Home » News » California Senate Bill 1302, Supported By Weed For Warriors Project, Offers The Only Option For Veteran Access To Medicine In Cannabis Deserts.

California Senate Bill 1302, Supported By Weed For Warriors Project, Offers The Only Option For Veteran Access To Medicine In Cannabis Deserts.

On Wednesday, May 2nd the State Senate Committee on Governance And Finance heard a number bills, including SB 1302 which will prohibit local government from banning delivery of cannabis into local jurisdictions. 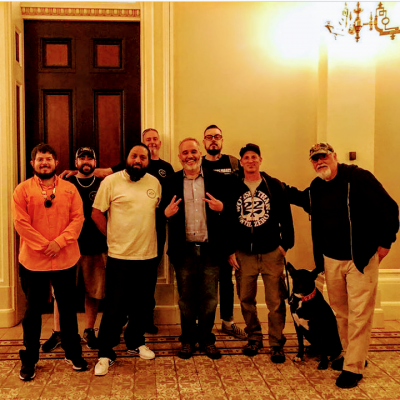 At issue is access, by all patients but specifically veterans, to much needed medical cannabis for their treatment of a multitude of illnesses and injuries. Supporters, of the Bill, believe that delivery of cannabis was not adequately addressed within the current California regulations and as a result local jurisdictions have deliberately banned cannabis delivery, from licensed commercial businesses outside of the banned areas, to patients within their jurisdictions. Opposition, to the Bill, feels that Proposition 64 gave authority, to every California jurisdiction, to decide if and when they wanted commercial cannabis activity to occur in their area and that SB 1302 takes that authority from them. 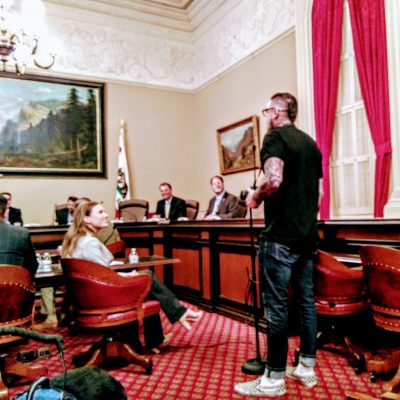 Weed for Warriors Project (WFWP) sees this as an issue of access to medicine for veterans. 22 veterans are committing suicide on a daily basis and medical cannabis is key in preventing those deaths. “It is very simple,” says WFWP CEO Sean Kiernan, “If you vote no on this Bill then you working against the best interest of veterans”

After testimony by supporters including the sponsor, We Drop Cannabis Delivery, and organizations such as WFWP, California NORML, Brownie Mary Democrats of Sacramento, Americans for Safe Access and California Teamsters, as well as over 75 others, the Committee voted to send the Bill on to the Senate Appropriations Committee for further review. 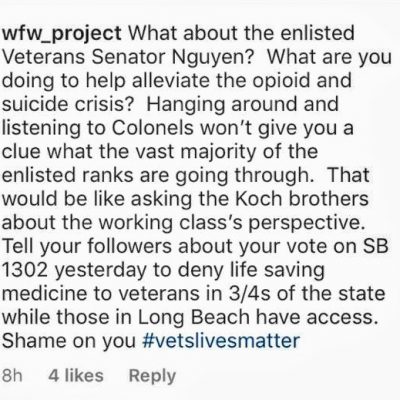 The only No vote came from Senator Janet Nguyen (R) from Long Beach’s 34th District. She and the opposition, including California State Association of Counties, League of California Cities, Long Beach Collectives Association and approximately 7 others are taking the position that SB 1302 violates their right to “Local Authority” under Prop. 64 or the Adult Use Of Marijuana Act (AUMA). WFWP believes that this bill does not violate “Local Authority” as the Cities and Counties are not being forced to allow commercial cannabis businesses to set up shop in their jurisdiction, SB 1302 only allows patients to gain access, to their much-needed medicine, by delivery from outside cannabis businesses. After a message thanking the commander of the Joint Forces Training Base at Los Alamitos, in California, on her Instagram feed we asked Senator Ngyuen “What about the enlisted veterans?”. We went on to ask “What are you doing to help alleviate the opioid and suicide crisis?”. There has been no response from Senator office or Instagram feed.

2 Responses to “California Senate Bill 1302, Supported By Weed For Warriors Project, Offers The Only Option For Veteran Access To Medicine In Cannabis Deserts.”

California Senate Bill 1302, Supported By Weed For Warriors Project, Offers The Only Option For Veteran Access To Medicine In Cannabis Deserts.