Home » Do We Have An Epidemic Of Marijuana Exposure Amongst Children?

Do We Have An Epidemic Of Marijuana Exposure Amongst Children?

For those that don’t know Kevin Sabet, he doesn’t like Marijuana.  Let’s rephrase that, the people who pay him don’t like Marijuana.  You know, the pharmaceutical companies, the police departments, the private prisons, the alcohol companies, the for profit rehab corporations and their Doctors, or to make it simple, Kevin Sabet’s owners, “Big Prohibition” which pays him and others a lot not to like weed.

So when the University of Colorado (full of Big Prohibitionist) published that more children are ending up in the emergency room for “marijuana exposure” since legalization, well it gives Kevin Sabet a perfect opportunity to perfect his skills and advance his mission, to combat legalization. 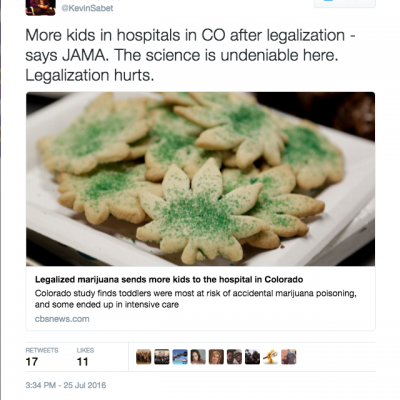 Let us be clear, we are by no means, diminishing the fact, that you should keep your edible and other forms of marijuana away from children.  Common sense does elude some people sometimes.  However, when we hear that the “researchers” say in a CBS news article linked below, “We expected a slight increase in marijuana exposures in young children after legalization of recreational marijuana in Colorado, but the increase was much more dramatic — five-fold — than we anticipated,” it raises eyebrows.

“Five-fold“, that sounds downright epidemic like, so let’s look at the numbers and see if we can put them in perspective.

An excerpt from the Washington Post article, linked below, attempts this:  “Beyond that, the raw numbers on marijuana exposure are extremely low. Marijuana accounts for only 2.3 of every 1,000 poison control cases for kids 10 and younger in Colorado, according to the JAMA study. At the national level, kids are much more likely to be poisoned by any number of common household products, like diaper cream, toothpaste, or energy drinks, than they are to be poisoned by marijuana.”

Again, “The authors analyzed data on hospital admissions at a children’s hospital and at a regional poison center between 2009 and 2015. Eighty-one children — all under 10 years old — were treated at the hospital and 163 marijuana exposure calls were made to the poison center.”

That “five-fold” increase to 81 total admittance over six years is as much an issue because the numbers are so small than an indication we have an unfolding epidemic as Sabet would like us to believe.  The law of small numbers is what we called it on Wall Street, that when expressed in percentage terms, makes the growth or decline sound a lot bigger than when expressed in absolute terms.  If I had one date last year and three dates this year, that is a 300% increase but hardly an indication my personal life is full of ladies wanting to date me.

Of course, the prohibitionist is going to give no indication of anything other than impending doom.  Why?  It works.  People don’t like to be bothered with facts, they like emotion and cannabis prohibition is based on emotion.  Fear, instilled, is fear hard to overcome.

We just want to put it in perspective for you, when you hear of a child poisoned who is admitted to the ER in Denver, it could be for Cannabis.  However, it’s more likely it is a host of other very common and more dangerous substances to include alcohol, tobacco or as the Washington Post said, “diaper cream, toothpaste, laundry detergent and crayons (1,683 crayon-related poison control calls for kids in 2014, in case you were curious).” are more likely causes.

All legal, in everyone’s homes, yet, Sabet is silent.  Silent not because he is concerned about Cannabis only, concerned because he is paid to express that concern in a dishonest and political way.  The total number of children who sought relief from cannabis ingestion at the ER in all of Colorado in 2015 was 15 from up from 7 two years earlier.  Hardly an alarming number.  However, when expressed as an over 200% increase, now you get their intellectually dishonest game.

Cannabis is the latest topic to expose academia as less about real research and more about grabbing those research dollars, which is fueled not by honesty, but by profits.  Intellectual dishonesty is rampant in Universities across America, just ask the University of Florida, or as Dr. Kevin Sabet likes to call it, home base.  We should learn from Wall Street’s rating agency debacle.  You can pay to weave any story you wish.  That is until it all comes unraveled and we see the emperor has no clothes.  It’s time academia and the broader public demanded better of those it pays!

If you don’t believe us, read if for yourself in this Washington Post article. – Sean Kiernan